How To Get Kitty Disaster Prepared

September is National Preparedness Month. When sudden disasters occur it is so easy to get stressed 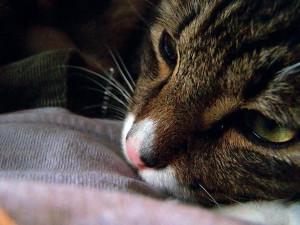 and confused. This is why it is important to prepare now in “peace time”. You have made your kit, plan and are staying inform, good for you. But what about your kitty? Is your cat prepared for the next disaster? How to get kitty disaster prepared.

August 29th 2005, one of the five most deadliest hurricanes in the history of North America struck. Hurricane Katrina made landfall as a Category 3 hurricane and pack winds of 125 mph. When it was through, over 1,800 people were dead. How many of these lives could have been saved if they were allowed to evacuate with their pets? Many people refused to leave New Orleans because they were not allowed to bring their pets. To many people, pets are like their children. According to a survey that took place after Hurricane Katrina, 44% of the people that decided to stay in the city and not evacuate did so because they were told that they could not take their animals with them. However, as the storm got closer and intensity increased the evacuation changed to mandatory. It is hard to know for sure how many pets were left as a result of the forced evacuation. According to The Louisiana Society for the Prevention of Cruelty to Animals, “Estimates that 70,000 pets remained in the city during the storm; of those about 15,000 were rescued.” Sadly, only 20% of the animals that were rescued got reconnected with their owners.

The good news is that as a direct result of the catastrophes that took place during the evacuation of New Orleans that involved animals President George Bush signed into act PETS (Pets Evacuation and Transportation Standards Act). It is now public law therefore, cities have to be sure to include all pets in their evacuation plans. If it is not safe for you to stay then it is not safe for your cat to stay.

How To Prepare a Cat Emergency Kit

Here is a list of items that you should have in your kitty emergency kit: