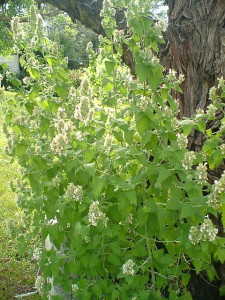 Since the dawn of time, species of all kinds have always been on the look out for where they could get their next “fix”. The desire for happiness is ingrained in all creatures whether is be human or animal. Sometimes this “fix” comes in the form of a trip to a exotic place while other times it comes in the form of taking a trip with a drug. Cats are no stranger when it comes to their “happiness drug”. Catnip is the drug of choice for most kitty cats. Why are cats so addicted to the green herb scientifically known as Nepeta Cataria? 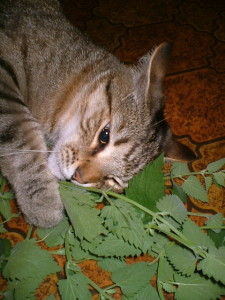 It is believed that the name “Nepeta” came from a town in Italy called Nepete. The second part of the name “Cataria” may be derived from the Latin word for cat. The Nepeta Cataria plant secretes an oil contained within its leaves and stems called Nepetalactone. This oil is highly affective with most cats in causing them to “get a high”. Nevertheless, there could be a percentage as high as 50% of cats out there that are not affected at all by the Nepeta Cataria plant. Big cats in the wild such as lions and tigers can also fall under the influence of the Nepeta Cataria plant. It is amazing that such a small plant can even affect a large creature such as a lion with the hallucinogenic symptoms from the Nepetalactone oil. However, kittens are immune to the affects of catnip and do not exhibit the same symptoms as adult cats.

It is thought that Nepetalactone may cause hallucinogenic effects in cats. Some cats moan and make other sounds while under the “influence” of catnip. One thought is that they may be hallucinating and that is why they are making those odd sounds. Catnip may influence cats the same way LSD or marijuana does in people. Perhaps catnip is releasing a “feel good pheromone” resulting in cats acting happy. However, bouts of aggression and playfulness can also occur. Other observations that can be observed in cats under the influence of catnip include: chewing, head shaking, sniffing, licking, body rubbing, drooling, stretching, hyperactivity and jumping. Their high could last anywhere from five to ten minutes. Afterwards, they become temporary immune to the affects of the oil and can not be affected again by it for at least an hour.

Catnip grows like a weed all over North America and tends to be found near highways and railroads. It is not recommended that you pick wild catnip near highways for your kitty as it could contain toxins from the roadway. Like any herb, catnip is relatively easy to grow on your own. All you need to get started is some soil, a pot and some catnip seeds. You can also purchase the herb all ready in plant form from your local garden center. As your catnip plant grows you will want to regularly pick the leaves to encourage growth. They can be dried out them sprinkled on the floor or given to your cat fresh.  Catnip is the ultimate cat drug.