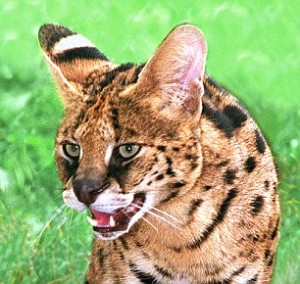 People are sleeping better in the city of Surrey, near the border of London, because the wild African cat has been found. The pet Savannah cat (appears similar to a leopard) was being taken care of by a sitter, while its owners were on vacation, when it escaped. West Moseley Police labeled the big cat, which is 2 feet long and 18 inches tall, as dangerous and urged citizens to stay indoors and to keep pets inside until it could be found. Warning people not to approach the African wild cat the police had the RSPCA and a police search helicopter searching the neighborhood for the loose wild cat. Known as a serval meaning “cat of spare parts” because it has big ears, long legs, short tail, long neck and small head. The serval cat managed to escape from its house around 9am the previous morning and had been wandering the neighborhood until about 8:50pm.

A neighbor Percy Cooper said, “I have been keeping an eye out for it in my garden and have seen the helicopter going overhead but I haven’t seen the cat.” The helicopter pilots were even joking on Twitter that the search continues on the safari for the escaped wild African cat. 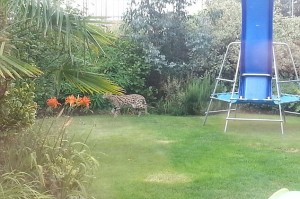 All the police, RSPCA and search helicopters could not find the big wild cat. Instead, it was found by a small domesticated house cat. The domesticated cat’s owner said that they, “saw their own tiny house cat challenge the big African cat which had been described as ‘dangerous’, but both were equally scared of one another.” The big African cat wa discovered in a garden that was not too far from where the big cat lived.

Thankfully for the police the big cat’s owner had come home and was able to recapture his cat by tossing a blanket over the serval cat. People in the UK have to have a special license to own serval cats. The owner did have a license therefore, was not charge with any crime. However, the police did advice him with some tips to keep this event from happening again.

A scary situation for the owners and the neighbors that ended good for everyone involved.