We just experienced the second of four total lunar eclipses in a cycle know as Tetrad (meaning four). The first one was April 15th of this year. This last one just occurred on October 8th. The next two total lunar eclipses will be in 2015 on April 4th and September 28th. Did you notice your cat acting any stranger then usual during the total lunar eclipse? Lunar making my cat crazy. 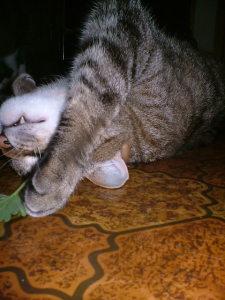 You’ve probably heard the saying before, “Everybody is crazy tonight, there must be a full moon out.” Could the full moon be the cause of abnormal behavior in people and animals such as your cat? According to a study done by The Journal of the American Veterinary Medical Association, there is a increase in pet injuries during or near a full moon event. They studied nearly 12,000 cases and concluded that visits to the emergency room increased by 23% for cats and 28% for dogs. The emergency room visits varied from trauma to cardiac arrest. This mysterious lunar crazies have a long history with no conclusive evidence for or against it. Another study conducted by British researchers found that the amount of people that are bitten by animals also increased during a full moon. However, a different study conducted by Australia researchers found no connection between the full moon and animals biting people.

One thing that all researchers do agree on is that there is something to the movement of the moon and animal (and human) behavior. One researcher suggested that it could simple be that more people and animals are outside during the full moon (brighter night) hence get into more trouble. This might just be the answer for people and dogs but what about cats? If your cat is strictly an indoor kitty then why would it be influenced by the full moon?

Maybe it is just a coincidences that your cat went crazy during last Wednesday’s (October 8th) total lunar eclipse or perhaps scientist still do not know what makes cats tick.