Just Because You Eat It Does Not Mean Your Cat Should 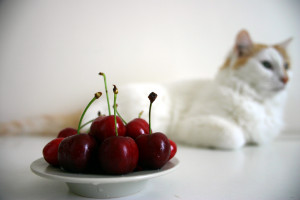 Cats love to eat as much as we do. Many times we discover that they plan to have their breakfast, lunch and dinner around our schedule. Or maybe it is because we feed them when we feed ourselves. Another reason they eat when we do is because if we don’t give them something to eat we will not be able to enjoy our dinner because they will have their head on our plate. While some human food is okay for cats to eat once in a while most human food cats should not eat. Just because you eat it does not mean your cat should.

While tuna meant for human consumption can be given to your cat once in a while be careful how often you give it. Tuna fish is very addictive in cats. Once hooked, it will be rather difficult to cure your kitty from its tuna addiction. Also, tuna does not have the nutrition that your kitty needs to be healthy. Finally, tuna can contain mercury which is not good for you or your kitty.

Meat fat can cause diarrhea, vomiting and upset stomach in cats. Also, bones pose a choking hazard. You should keep these types of foods trimmings out of the reach of kitty.

Like anything raw you run the risk of food poisoning. Food should always be cook. Also, raw eggs contain the protein avidin which can get in the way of your cats vitamin B. This can lead to coat and skin problems. 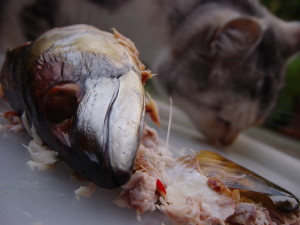 Again, as with anything raw you run the risk of food poisoning from bacteria. Contained within raw fish is an enzyme that kills the vitamin B thiamine. The death of this vitamin can lead to convulsions, neurological issues and coma in your cat.

A little bit of liver is okay for your kitty however, too much liver can be toxic. This toxicity can lead to various forms of deformities in your cat. It can also lead to death.

Why would any cat want to eat onions? Cats are finicky eaters and sometimes their finickiness leads to them going out and trying new things. Onions whether it be cooked, powered, or raw, can get into your cat’s blood stream and break down his or her red blood cells. A break down in red blood cells can lead to anemia. A small amount of onions won’t hurt but if given over a long period of time could be damaging to your cats health.

The majority of cats out there are lactose intolerant. Kittens can drink milk because they are not lactose intolerant however; as they get older they become unable to digest milk. If you give your kitty too much milk it can lead to a upset stomach and diarrhea.

Alcohol has the same effects on a cat as it does a human. Beverages that contain alcohol can take a toll on the brain and liver. While a human weighs over 100 pounds a cat weighs in at less they 20 pounds. We can get a way with drinking alcohol once in a while but your kitty can not. All it takes is two teaspoons of whisky to put your cat in a coma. However, do not worry if your kitty had a sip of your pina colada. A little bit of cream should be okay. Just don’t let it happen again.

Too much coffee can kill your kitty. Some of the symptoms of too much caffeine are: rapid breathing, muscle tremors, fits, and restlessness. Caffeine is not only found in coffee. Other products that contain caffeine are: energy drinks, cocoa, soda, chocolate and cold medications.

A lot of people give grapes and raisins to their pets as a treat (must be dog people). However, did you know that they can cause kidney failure in your cat? Grapes and raisins can make your kitty ill and should be kept out of reach. 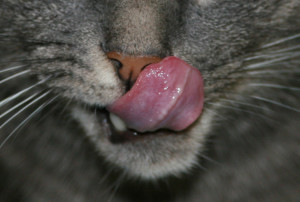 Chocolate contains theobromine which is toxic to cats. This kitty toxin is found in all forms of chocolate whether it be white, milk, or dark. If a cat gets a hold of some chocolate it could cause: tremors, abnormal heart rhythms, seizures, and death.

Xylitol which is found in baked goods, toothpaste, gum, and candy can cause your cat’s insulin to spike. This increase the chances of the blood sugar to decrease. Xylitol can lead to: lethargy, vomiting, loss of coordination, and liver failure.

Like in humans, too many treats leads to obesity. Obesity in cats will lead to all kinds of health problems such as diabetes.

Cats nutritional needs differ from that of dogs. Cats require more protein than dogs. Cats can eat dog food but over time will become malnourished because of the lack of kitty essentials that can only be found in cat food.

Just as yeast rises on bread so does it ride in your cat’s stomach. This can cause a upset stomach in your cat. Yeast also produces alcohol which is not good for kitty.

Human medicine is toxic to cats. Medicines meant for people contain ingredients such as ibuprofen and acetaminophen which can cause your kitty to get very sick and even die.

Just like we would do with our children we try our best to keep kitty safe as well. However, accidents happen and your cat could get into something that they should not be in. If your cat does get into something dangerous call your local vet, emergency clinic or Animal Poison Control Center immediately.

Tags: bad foods for your catdo not feed cat thisfood bad for catjust because you eat it does not mean your cat shouldwhat you should not feed your cat