Cat Uses All 9 Lives Plus More After Falling 12 Stories 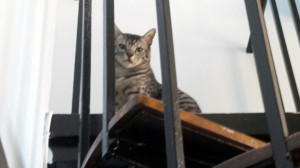 They say that cats have nine lives. Well, a cat in New York has used up all nine and a couple more of his lives after falling twelve stories out of an apartment building window. Amazingly this little kitty cat survived to tell his story, through his owners interpretation of course. Gizmo, the cat, must have somehow managed to get out of his owners, Samuel Jacobs, window while Jacobs was away. When Jacobs came home to his Manhattan Apartment Building his six year old cat was no where to be found. After searching everywhere for his cat Gizmo he decided to look out his 15th floor window. Jacobs heart sank when he saw his cat on a overhang twelve stories down. Jacobs told the news that, “I literally saw him and I was like, ‘Oh no, no no. He’s dead’” Jacobs enlisted the help of the building porter and together the managed to save Gizmo from the third story overhang. Gizmo was purring in Jacobs arms when he reached him which told him that he was going to be all right. After the purring though came the screaming. Jacob said, “He looked so relieved to see me” then “He [started] crying and screaming.” Jacobs took his pal Gizmo to the vet immediately where, to his relief, discovered that he only suffered a chipped tooth and some minor injuries. Gizmo is expected to completely recover from his ordeal. Jacobs stated, “I love this cat, he’s part of the family.”